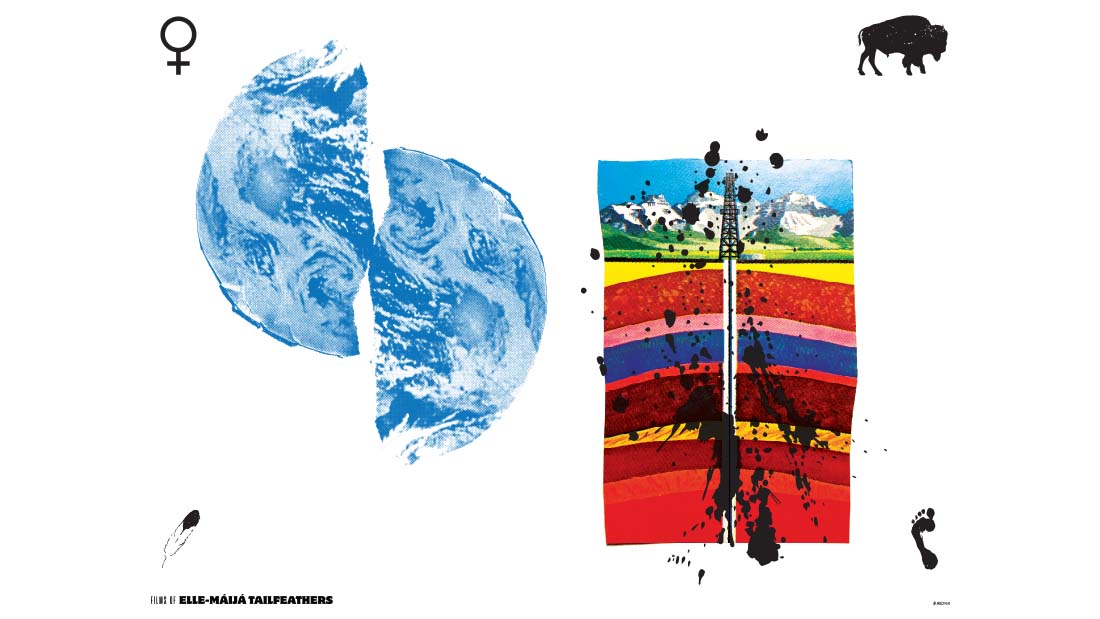 An up and coming feature film director, Elle-Máijá Tailfeathers has demonstrated herself as a powerhouse both in front of and behind the camera. She has delved into a variety of genres and forms throughout her ten year cinematic career, although constant themes in her work concern the promotion of Indigenous sovereignty, the relationship between colonization and violence against Indigenous women, and environmental activism. While some may recognize her as Joss from Mi’kmaq director Jeff Barnaby’s 2019 zombie horror flick BLOOD QUANTUM (a spectacular reinterpretation of Obomsawin’s INCIDENT AT RESTIGOUCHE), Tailfeathers also flexed her acting and directorial skills in her film THE BODY REMEMBERS WHEN THE WORLD BROKE OPEN (2019). In THE BODY REMEMBERS, Tailfeathers plays Áila, who assists the young pregnant Rosie (Violet Nelson) after witnessing her verbally and physically assaulted by her boyfriend. Co-directed with Canadian director Kathleen Hepburn of NEVER STEADY, NEVER STILL (2017), the film centres female Indigenous solidarity while exemplifying the social barriers present in structuring and maintaining community. Her next feature, this time a documentary titled KIMMAPIIYIPITSSINI: THE MEANING OF EMPATHY on the opioid crisis in Kainai First Nation in Alberta, is slated to arrive in theatres later in 2021.  – Emily Sanders

Benjamin Nelson has been a graphic designer, printmaker and active member of the Kingston arts community for over 15 years. A keen interest in 20th century pop-culture, design history, minimalism and modernist architecture often influence his visually striking work. Using illustration, collage, analogue and digital techniques he creates original artwork for musicians, record labels, festivals, art organizations, and galleries. Nelson has also been fortunate enough to perform live music across the world with such notable local bands as PS I Love You and Deux Trois.