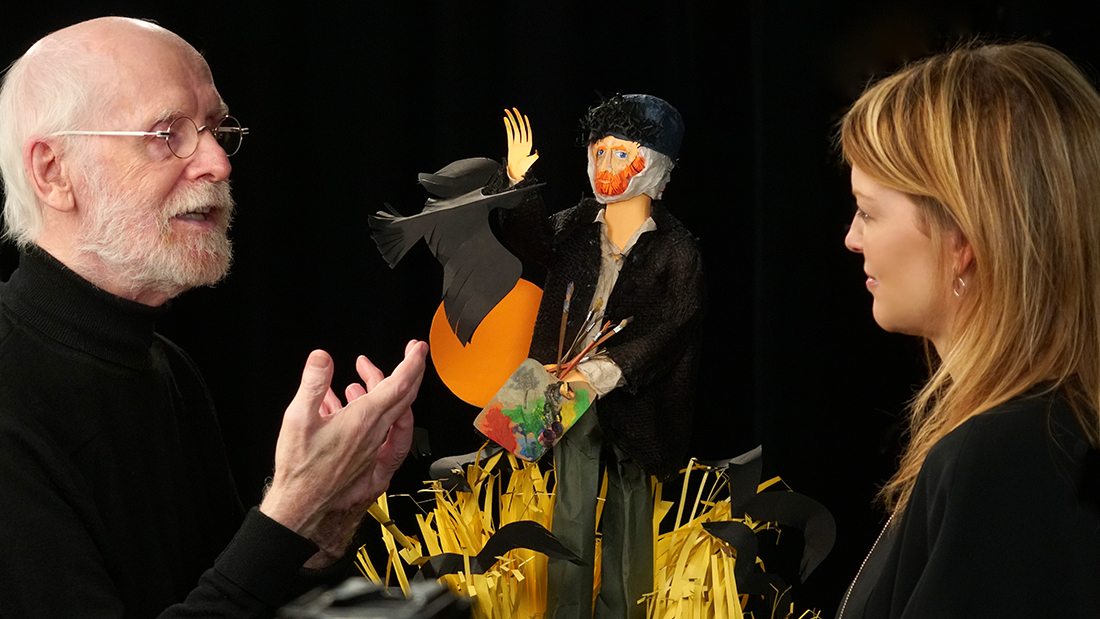 KCFF’s Sloan Westlake had a chance to catch up with THE PAPER MAN Lafortune en papier director Tanya Lapointe to chat about meeting and getting to know Claude Lafortune and his legacy of warmth, compassion, creativity and celebrating our differences.

What was your inspiration for The Paper Man?  Why did you choose this subject?

I grew up in the 80’s and 90’s in Ontario, which meant that TV show hosts like Mr. Rogers, Bob Ross and Mr. Dressup were like family to me. On the French channel, I also watched Claude Lafortune who made paper sculptures on camera in a matter of seconds. What he did with paper and scissors looked like magic.

In 2015, I was privileged to meet Claude once I had become a news reporter in Montreal. It was like meeting a distant relative. Even as an adult, I was awestruck by his unique paper sculpting technique. We didn’t keep in touch after that but in 2018, Claude sent me an unexpected message on Facebook, inviting me to his new exhibit. He was now 81 years old. He was still making paper sculptures, and they were more elaborate than ever.

I shot the movie over a two-year period. Early on, the film took on a life of its own with events and honours multiplying over time. I felt a calling to tell Claude Lafortune’s story because I realized he had been overlooked for all of these years. He had long been perceived as a kind old man making arts and crafts for kids on television. My goal with the film was for people to finally recognize him as an artist, and to elevate his body of work to the status of art.

On April 19th 2020, Claude Lafortune died of COVID. I was devastated. I was not only losing a childhood idol, but also a friend. It became urgent for me to bring Claude’s story to the screen, and share his talent and inspiring story with the world.

What was it like working with Claude Lafortune? What did you learn from working alongside him?

Claude seemed like an elegant, soft spoken and unassuming man on television, but little did I know, he also had a great sense of humour. On and off camera, he loved to make people laugh and smile. His paper sculptures, I realized, happened to be a shortcut into people’s hearts.

My takeaway from making this film with Claude is to believe in your vision, not in an intellectual way, but to trust your instinct. Despite the fact that he was sometimes mocked by some for working with mere paper, he persevered and made a living with paper, glue and scissors. He never shifted to other materials, he stuck with paper until the end.

On a personal level, I will always remember Claude telling me that he used to get disappointed if someone didn’t behave the way he expected them to. He told me, “You have to love people as they are, not how you want them to be.” Even though it was never said overtly, this was a guiding principal throughout his career on television.

What message do you hope to portray throughout your film?

I will admit it to you here, I want this movie to melt people’s hearts.

Claude Lafortune inspired generations of children through his celebration of creativity, inclusivity and diversity. Beyond the paper, he had a gift in creating a safe space for kids to talk openly about an illness, a disability, or their cultural heritage. He wanted audiences not only to accept people with their differences, but to love them with their differences.

A reporter told me the movie made him want to be a better person, and that’s exactly the kind of response I was going for. I’m beyond grateful that the film is resonating with audiences throughout Canada. Whether people grew up watching Claude on television or have never heard of him before, he seems to inspire the best in everyone.

Have you ever tried paper art?  What are some of your artistic hobbies beyond making movies?

When I was a child, I often tried to make paper sculptures like the one’s Claude demonstrated on television. Needless to say, I didn’t make a career out of it.

Years ago, I did however make a Santa Claus parade float in Embrun, Ontario out of cardboard boxes (and a lot of help from my family). Does that count?

The truth is, I’ve always loved having artistic hobbies. I used to make all of my greeting cards by hand. I still love photography. I took a glass blowing class. I tried drawing, then acrylic painting, and later made attempts at clay sculpting. I still have a few pieces hidden away in some dark closet. I keep them as a reminder that I’ve made these objects with my own two hands. Even if I’m the only one to see them, I know they are an expression of who I am.

Do you have any anecdotes about Kingston that would be interesting to our audience? Time spent here, events attended, etc.

I lived on Base Borden and in Barrie when I was a kid. Years later, in Toronto. So, I remember driving through Kingston on the 401 every time we went back to visit friends and family in Hawkesbury, Ontario. It doesn’t make for much of a story, but I guess it qualifies as an anecdote.

I’m always juggling and developing projects, but it’s too early to talk about most of them.

In 2021, I’m looking forward to the release of Dune, and sharing this epic story featuring Timothée Chalamet in the role of Paul Atreides. It’s a movie I’ve been working on since November of 2018 as Executive Producer. In fact, I also wrote a book on the filmmaking process entitled The Art and Soul of Dune, which will be published by Insight Editions when the movie is released in theaters this fall.

In the meantime, I’m working on getting The Paper Man in front of as many people as possible, and getting Claude Lafortune some well-deserved recognition.