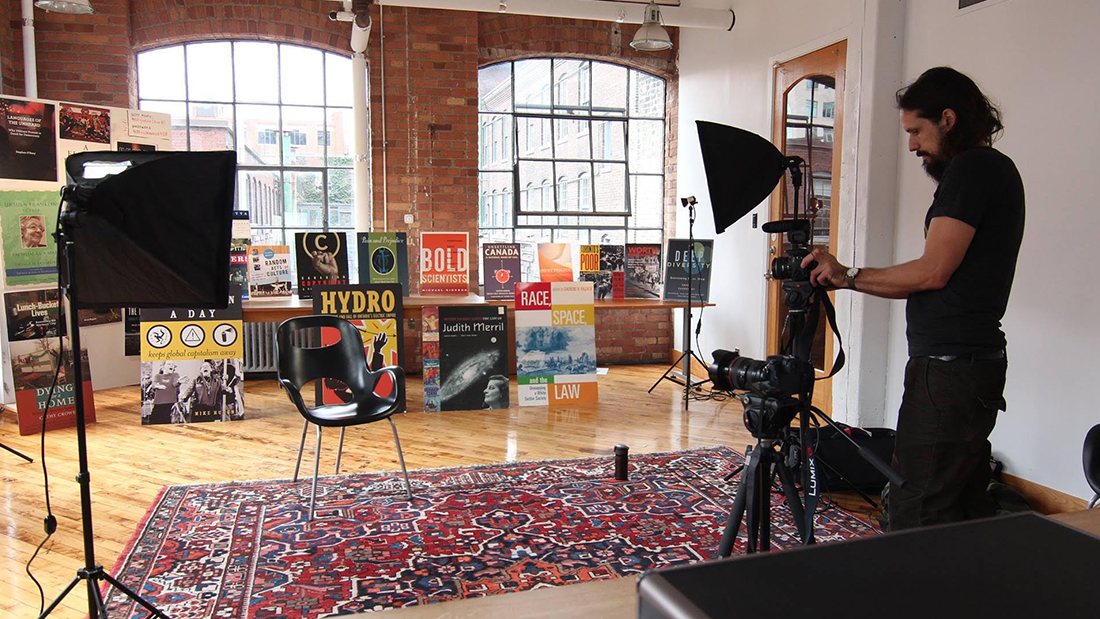 Kingston filmmaker Josh Lyon has been featured in our Local Shorts Program before, but this year he’s back with a new film, THE THREE SISTERS (screening during EPICS 1). KCFF’s Vishmayaa Jey chatted with him at the Festival’s Launch Party at Tango Nuevo a few weeks ago.

KCFF: So tell us about this film you have in the festival.

JL: In the fall, I was hired to work with a group of Indigenous youth at the Katarokwi Learning Centre – not entirely – Indigenous youth mostly – but high school kids that were doing experience-based learning based around food issues, food sovereignty, indigenous food traditions, the different methods of food preparation, agriculture… all of that kind of stuff and learning about that history by going on field trips and cooking together. I was hired to be the Filmmaker-in-Residence with this group of youth and with a couple of Indigenous elders as well.

And so we made five or six films that I shot and edited, but also collaborated with the youth on, and one of those is in the festival. [The film] is a combination of a field trips to The Three Sisters Garden on Topsy farms on Amherst Island – It’s a traditional way of growing food together, corn, beans, and squash together – and then a guest speaker that came in from Peterborough to talk about some of the same stuff that we learned about on the field trip

KCFF: So you were a Filmmaker-in-Residence; was this with a particular program?

JL: I’m a local filmmaker for hire; I mostly do a lot of work four different groups around the city, mostly documentary kind of stuff. They brought me into mentor, teach and make the films with this group.

KCFF: Are you taking The Three Sisters elsewhere or this a very Kingston based project?

JL: I’ve submitted [The Three Sisters] a few places along with one of the other films. There were two films out of the five that I submitted to a few other festivals, so it’s going to be showing at DocFest in Belleville – the same film the same weekend actually, so it’s going to be premiering simultaneously in two different towns. The other ones are going to be released online through Loving Spoonful’s YouTube channel so they’re putting most of them out, but there’s a couple that we felt like these have a bigger story to tell that we wanted to get in front of a bigger audience than what they get from their YouTube; those were the ones that we submitted to festivals. Hopefully somebody else will pick up the other one and it’ll be different films in different places which will be neat too.

KCFF: What are you up to next?

JL: In terms of filmmaking stuff there is a couple of projects that are in development and in conversation but I’m not really sure….  things are brewing we’ll see where they’re going.

One of the things that was really neat about this project is that somehow in my filmmaking I’ve had a number of opportunities to work with indigenous groups and learn so much in the process… and really, to be able to be a filmmaker in the capacity that I’m doing my work is to hear and amplify other people’s voices and not to speak myself, but to actually get to elevate what other people have to say.

As a recent immigrant Canadian, to be able to be a part of the amplification of Indigenous voices is really important to me, and so a couple of the new projects are in that vein and I’m so glad.  [I’m so glad that I’m] getting to use this thing that I can do to let others speak and shine a light on things that I think are so important in Canada and part of that National dialogue. I’m excited about those kinds of projects, hopefully there will be more of them.

The Three Sisters will be playing in the Local Shorts: Epic 1 Program at 9:10PM on March 3rd at the Isabel Bader Centre.

Interviews here have been edited for length and/or clarity.